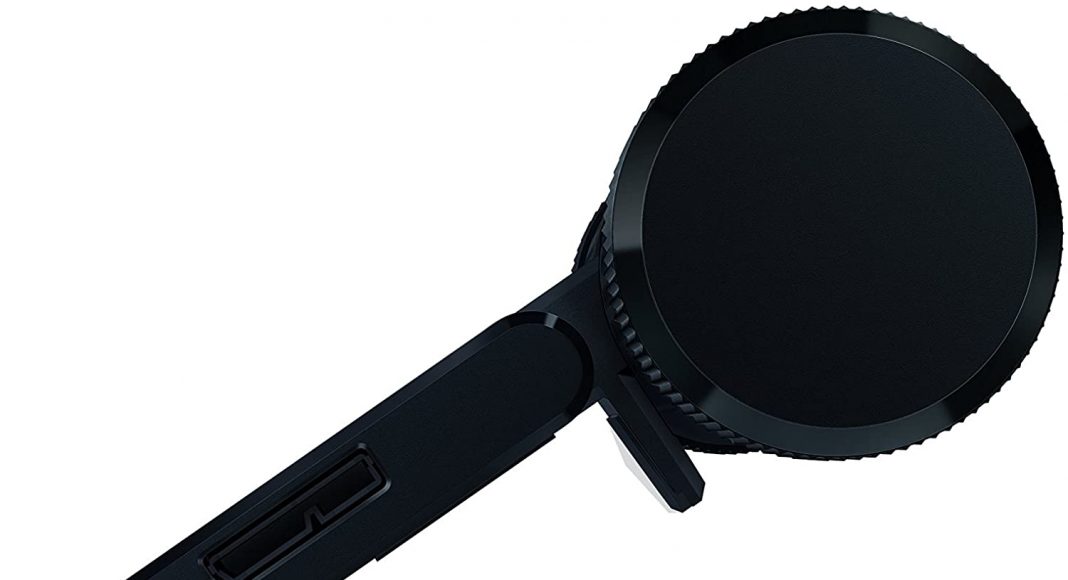 On its debut in September 2016, Razer’s Stargazer met with some considerable opposition, as Logitech released their new C922 webcam at the same time. This pitted the tried-and-tested, and popular, against the new and different, as Stargazer was the first and only external webcam with an Intel RealSense 3D camera. That it survived, is still on the market today, and more is a testament to its importance in bringing Intel’s RealSense technology to the masses.

Razer Stargazer delivers three powerful advanced video features engineered and made possible by Intel, with their RealSense technology: Dynamic Background Removal, 3D Scanning, and Face and Gesture Recognition. Typically for cameras that support RealSense 3D scanning tech, it has three large sensors that are mounted across the front: an infrared sensor, color sensor, and an infrared laser projector.

At the time, face and gesture recognition was a new and cutting-edge technology, with Stargazer a pioneer. Of course, this tech has steadily advanced in capability and performance since then and with it, greater opportunities for using it. Razer has undoubtedly reaped the benefits of being one of the first to market with it.

Razer Stargazer to this day offers a high definition camera seamlessly integrated with an Intel 6th generation core processor, for still great desirability and reliability, as evidenced by its impressive capabilities and popularity.

Streaming video games is ever-increasingly popular. When doing so, some of the best YouTubers or Twitchers use green screens to get rid of the living room and its clutter behind them and put themselves and by extension, you, right in the middle of the action.

How about if you want background removal, but don’t have space at your place, or the money, for an actual green screen? Then, Razer believes that its Stargazer is the solution for you. Four years after its release, RealSense cameras are still largely only found in all-in-ones and laptops, with Intel’s desktop models marketed at developers. By automating this process in the camera, without the need for a physical green screen, Razer opened its potential to a new kind of user. Perhaps even, a new generation.

Stargazer uses Intel’s RealSense technology for depth perception, to physically isolate the subject in space by recognizing its distance, and then cleverly removing the background. It made this excellent dynamic-background removal feature available to the masses; well, at least to those with Windows 10 computers with sixth-generation or later Intel Core CPUs.

Video games require professional-quality, as well as a high frame rate. Providing a maximum of 60 frames per second, Razer Stargazer gives you control and flexibility over what you’re capable of streaming. This frame rate permits you to stream as well as anyone else online. There’s a second mode for a higher resolution than the HD camera is capable of, which limits the frame rate to 30 frames per second, but boosts the resolution to a maximum of 1080p; plenty of performance for professional use.

Razer Stargazer is ready right out of the box to begin scanning 3D objects. While many 3D scanning applications make gaming more immersive and fun to play, it provides serious practical applications as well.

If you’re someone who uses 3D printers for personal or professional, you can immediately scan either an object in real space, without any additional programming or hardware requirements, and have a digital copy of it on your computer with very little effort. If you’re a game developer, building or modifying one a game in Unity, then 3D objects scanned by Stargazer are immediately compatible and portable to your programs.

Of course, there are other reasons to use Razer Stargazer besides game playing or building. For your conference calls, a RealSense-ready version of Personify puts you ‘floating’ on top of your desktop to better share presentations. You can use the infrared camera with Windows Hello to make a facial scan that will enable you to log in to your PC.

We gave Stargazer a thorough workout to test for that, also for its overall durability and ease of use, for a complete review of its quality, and to determine if it’ll be a good purchase for you.

In terms of simple design, then Stargazer a winner. Of course, its elongated shape is a necessary choice, as it houses three cameras, but it’s beautiful as well as functional. Sitting low over your monitor, it looks like it was designed to complement all your other gaming peripherals.

Going with a similar one to Logitech’s great, hinged design with the mounting arm, it added two end-cap microphones and its three-headed snake logo to the sleek pipe-shaped chassis.

We liked that Stargazer’s micro USB 3.0-to-USB A cable is a whopping 8.2 feet long, giving you plenty of scope to connect a gaming desktop to the camera. It’s braided in fabric for both durability and to make it tangle-free. It’s also removable, for easy transportation, or if you do somehow break it, replacement.

Performance matters more than looks though, and Razer Stargazer doesn’t disappoint. Using USB 3.0 means that it can communicate back and forth with your computer and handle a lot more data than most other webcams that exist.

It’s capable of transferring up to a huge 4.8 gigabytes per second. With duplex data transferring systems it is possible to simultaneously move large chunks of data as well. With USB 3.0, Stargazer’s hub can handle more power through its bus powering system, due to its capability of supporting advanced power management features.

Razer Stargazer’s winning feature is that depth-sensing technology; a game-changer for professional and amateur streamers alike, eliminating the need for setting up and using any type of green screen. Instead, you have the option to simply edit out any existing background at a certain depth and replace it with any particular background of your choice, however, you can also move objects and create a custom viewing space as well.

In our test, Stargazer removed our office, just as if we were sitting in front of a green screen. The effect was instantaneous, with no setup required. Without fail, it has an accurate idea of where you are, what constitutes removable background filler, and it reacts quickly to sudden changes.

It also always had an exact cutout of head and shoulders, having a much easier time with hair and the edges of the face, than Logitech’s C922 when we tested that.  Razer’s offering also works at longer ranges, keeping you separated from the background even if I move four or five feet away from my monitor.

Razer Stargazer takes decent photos and videos, and the camera has strong color accuracy. Also, great sound with excellent dual microphones filtering out ambient noise and detecting precisely where the sound of your voice is coming from to produce a concentrated beam. This makes Skype calls crystal-clear.

Razer doesn’t include too much software with the camera, only Razer Synapse, its program for configuring all of its laptops and peripherals. It’s very simple to use.

We found it quite a bit heavier than average for a webcam. And as much as we love its look, it hangs out over the monitor, which with our office’s overhead lighting, cast a small shadow on our monitor. Just enough to irritate us at least.

Razer Stargazer’s image quality is simply not as good as Logitech C922’s. Especially in low-light, where we encountered quite a lot of flickering and buffering. Even in optimal good light, Stargazer’s image is neither as crisp nor attractive as the C922’s at 1080p/30fps or 720p/60fps. We’d even describe the 1080p shots that we took, as a little blurry. While it has strong color accuracy, focus on hair and parts of my face, resulted in fuzzy details.

It’s certainly better than your laptop’s built-in webcam, but equally no way as good as its Logitech rival. For Skype or other regular webcam uses, you’ll notice the difference for sure.

Admittedly, Razer Stargazer’s main attraction and worth is its dynamic background removal function, which does work brilliantly. The only issue that we encountered with it, was that if you raise your hands and gesture quickly, RealSense occasionally loses track of your fingers.

To thoroughly test its performance for gaming, we played in two different lighting situations: our bright office and a darkened room while streaming with XSplit Gamecaster. At 4K on high settings, games stuttered, as did the video stream. When we pushed it to its ultimate limits, we found syncing a bit off, with mouthes moving seconds after the sound.

As for facial recognition, after our PC was asleep for a while, the camera did so too and wasn’t ready to go. You have to click on the facial-recognition option for the camera for it to turn on and scan. This kind of defeats the whole point of the application.

Just the Star Razer webcam itself, with that braided power cable, and quick-start info.

It has raised, textured handles that allow you to adjust the camera angle, via the flexible clip for laptops and desktop monitors. If you prefer to use a tripod, the included mount on the bottom helps with easy attachment.

To cater to a new generation of gamers, Razer Stargazer provides the highest frame rate optimized resolution. The ability to enjoy high-quality lifelike video is made possible by its 60 frames per second streaming.

Additional Intel drivers are required and automatically downloaded and installed on your Windows 10 system as soon as you plug it into a USB 3.0 port. These unlock Intel’s RealSense features…

The included state-of-the-art depth-sensing technology makes it possible to remove the background or switch it up entirely allowing for more viewing space for the game.

Razer’s Stargazer is the first and only webcam that comes with 3D scanning. Scanned objects can easily be ported into Unity for development work, while files can be prepared for 3D printing. Gamers can scan their own face or any object of their choice right into their favorite games.

Razer banked on people needing RealSense and a good background-removal solution for Stargazer to claim its place in the market. A pretty specific niche, but it has proved to be a good call. Its integrated advanced technology meant that it provided desirable functionality for many years to come, and ahead of the competition.

For ‘more regular users’ who just wish to speak with family over Skype, Razer Stargazer will likely be a lot more powerful than you’d expect and need. But for the professional webcam user, who expects and needs the most out of their hardware, it’s well worth the investment. Professional designers and video game developers can also find it good value, even if they don’t require its highest resolutions or superior frame rates.

For sure, the boom in online broadcasts and video game streaming gave Razer Stargazer a huge increase in its overall value, thanks to the innovation of its unique features. It has the best green-screen mimicry we’ve seen, although the image quality isn’t as vivid and detailed as its Logitech rival. But if you’re looking for a camera mainly to stream games on YouTube Live or Twitch, then Razer Stargazer is definitely for you.

You May Also Like: A Deep Dive Into Razer Atheris