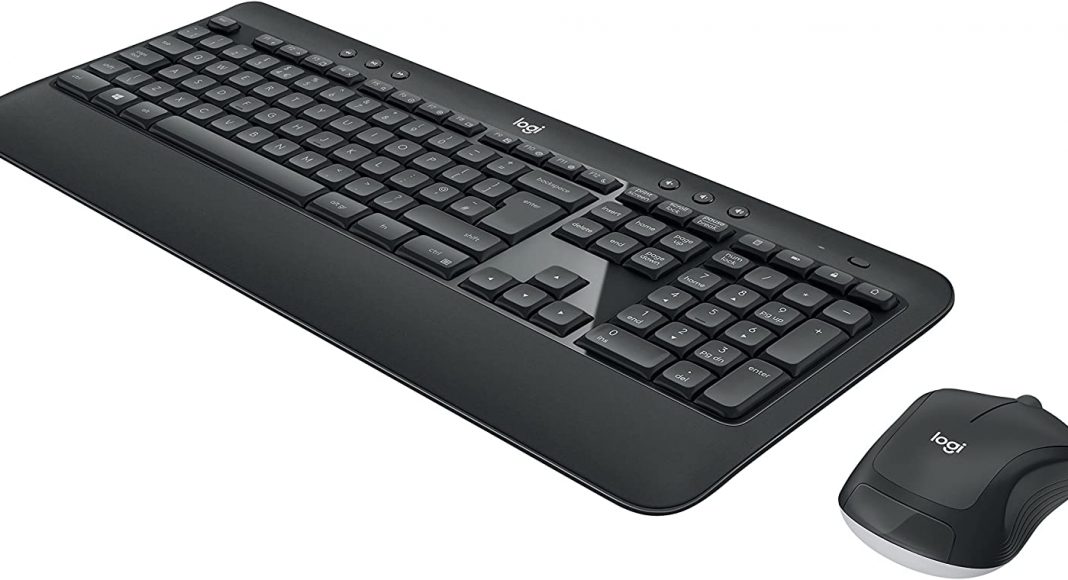 Logitech MK540 is a quiet and wireless keyboard paired with an included mouse. Released in March 2018, it still offers snappy typing and a truly good deal today.

Its bundle provides the user with a roomy keyboard complete with dedicated media buttons, programmable keys, and tactile typing with a minimum of noise. The mouse is solid and scrolls smoothly include programmable gestures.

So far, so usual and unspectacular, right? But, MK540’s real selling point is that it’s designed to cope with spills. And we mean real spills, as we’ll show you later in our review below…

On its original release just over two and a half years ago, many asked the unsurprising question of whether there really was any need for Logitech to release another wireless keyboard and mouse bundle?

But for those who do a lot of typing and were on the lookout for a premium, snappy keyboard without going the mechanical way, should give the wireless MK540 combo a serious look.

Perhaps you don’t like the clickety-clack sound of a mechanical keyboard. In our office, we certainly find that it can be annoying, disturbing, and obtrusive. Especially to others around when they’re trying to work.

And how about ergonomics for different typing and seating styles? Logitech thinks that it’s got that covered.

Also, whether you’re working in a busy office like us, or on your own at home at maybe a cluttered desk, you know too well the chances and risks of spills. And the long hours that you work, and possibly the more coffee that you’ll need (or tea for our British cousins!), then the higher that possibility becomes.

Logitech believes that with its MK540 that it’s found the solution. Of course, you have to pay a little bit more for that. But is it worth it? Let’s see then its key advantages over those cheaper alternatives…

Compatible both with Windows and Chrome OS systems, this keyboard and mouse set also connects to a Mac.

This premium keyboard certainly looked and felt great sitting on a desktop in our office for our week of testing. That’s particularly thanks to its curved plastic palm and wrist rest. This integrated ergonomic support is a particular benefit for those who like to type with the heels of their hands pressed against the front of the keyboard and their fingers all scrunched up.

We liked the fact that you can choose between three ‘typing profiles’. At its rear, there are adjustable and retractable feet. These can tilt it by four or eight degrees. Alternatively, you can leave it flat of course. More than catering to just personal preferences, these provide greater ergonomics for different typing styles and postures. And with the growing focus on health and well-being in the workplace, that’s increasingly very important.

Logitech MK540 has nicely shaped: broad and sporting a slightly contoured and sculpted design. These make for easy discovery and a quality feel. Membrane-style switches are in the design which allows the keys to having a pleasing, solid bump about halfway through each keystroke, plus a nice snappy action as the keys spring back into place. We were surprised by how good the MK540’s keys felt to the fingertips.

Because it operates with a bumpy approach instead of a clicky one, the MK540 keyboard can effectively stay impressively quiet, a quality that will please the nearby workmates. The MK540 creates a wonderful balance between a tactile typing feel and easy-on-the-ears keystrokes. But of course, personal preference comes into play here.

However, don’t underestimate the value in them being arranged as you’d expect, with medium travel, when many manufacturers are seeking to ‘reinvent the wheel’ these days.

You will find plenty of hotkeys with Logitech MK540 that cover from search, save, and print to setting, lock, and calculator. Also included are 10 programmable keys, that are customizable with the help of the Logitech Options app. This allows you to create your own shortcuts, or pick from favorites, which can be a big timesaver. F1 to F8 are all reprogrammable, as are the Lock and Home keys above the number pad.

A nice bonus is the dedicated volume and media playback keys, which flank the Logitech logo just above the main keyboard. The usual media playback controls, with the previous, pause, and forward buttons on the top left, and the audio controls of mute, down, and up ones handily and sensibly separated out on the right. Therefore, you don’t need to look when pressing; a choice of which to hit out of three is obvious, less so if they’re clumped together in a group of six.

No need to worry about the keys fading thanks to Logitech’s “abrasions-resistant key printing”. For sure they’re not lasered on, but we didn’t test the board for long to find out if that’s true, but it sounds like a good idea. We recommend that you read its online reviews to find out.

The three-ounce mouse that comes bundled with the Logitech MK540 the keyboard has a rubberized texture on the sides, a subtly bumpy scroll wheel, and a smooth glide that made for satisfying mouse scrolling. Nothing out of the ordinary there. But the soft-touch coating makes for a non-slip experience in your hand.

For sure, clicking the mouse buttons felt snappy. Also, the good news for lefties is that it’s ambidextrous, which is a nice touch and is shaped comfortably for both left and right-handed users.

With only two buttons, there is no chance of any confusion, unless you count the clickable and programmable middle button. Utilizing the Logitech Options app allows you to program the MK540’s mouse. The scroll wheel button can be set to do any of the many tasks you designate, from switching apps and launching the Windows calculator to closing a window or even shutting down your PC.

You can also use the middle button as gesture control, which lets you maximize windows, switch virtual desktops, rotate items, and more, all by simply pressing the scroll wheel and scrolling up, down, left, or right.

Overall, it’s a very simple mouse. And no bad thing for it. While it isn’t a travel mouse, it only weighs around 100g with the battery, so it’s easy to just throw in your bag.

Definitely one of the best features of this keyboard, is that it lasts on one set of batteries forever.  Logitech claims that the standard alkaline AA batteries supplied, should last three years for the keyboard and 18 months for the mouse. Ok, the mouse only lasts for half as long as the board, but 18 months of typical usage is very good. Especially when you consider that’s with a single AA battery.

In truth, the MK540 has this in common with all other Logitech wireless keyboards. Although it’s definitely in contrast to, and much longer than, the numerous short-life and no-name wireless keyboard packs that you find on Amazon.

Both the keyboard and mouse sprang to life the moment that we connected the included USB dongle to the PC. No drivers are necessary. The keyboard goes to sleep after about a few minutes of inactivity but reconnects immediately after a tap of a key.

But how about its unique selling point, we hear you shout? Ok. So yes, we did spill coffee on it intentionally; the whole of our office gathered around, genuinely fascinated to see if there were any possible consequences. Or if it does what Logitech claims; basically nothing.

The sole Brit in our office, even sacrificing his afternoon tea. And made from precious real British tea bags, that his family send over to him every couple of months!

For further good measure, we even went to the sink after and rinsed the MK540 under the tap, giving it a good and thorough cleaning. We jiggled it around so as to give the water a good chance to get right in. We then turned it upside down for it to run away.

We’re very pleased to report that, after leaving it a few minutes to dry off a bit, it worked fine, and continued to do so even after leaving it to dry out more thoroughly overnight. It didn’t phase it one jot. It still ran without a hitch or sticky key.

Measuring 18 x 7.6 x 0.9 inches and weighing 1.9 pounds with the batteries installed, MK540 isn’t a mobile keyboard that you’ll always be putting in your bag for on-the-go.

We thought that the mouse buttons felt a bit plasticky and cheap compared to the rest of the mouse. And it felt a little lightweight, which might be because it only takes one AA battery, whereas most take two. That said, we got used to it after a short while

Logitech MK540 connects by the included dongle only. There are no options for wired or Bluetooth connection. So, you better not lose it!

And while it can be used with a Mac, there’s only limited support, with no way to correctly map the keyboard’s hotkeys to MacOS functions.

You May Also Like: A Deep Dive Into Logitech X56

Logitech MK450 is a keyboard and mouse set requiring Windows 7, 8 or 10, or Chrome OS. You can use it with MacOS, but it offers only limited support. It is powered by 2x AA batteries required for the keyboard (advertised with three years of battery life), and 1x AA battery required for the mouse (advertised with 18 months of battery life). It comes with a two-year warranty.

The keyboard measures 18 x 7.6 x 0.9 inches, and with the batteries weighs 1.9 pounds. The mouse,1.5 x 2.5 x 4.4mm and 3.5 ounces. The MK540 keyboard has adjustable and retractable rear feet that tilt the keyboard at a four or eight-degree angle, for three ‘typing profiles’ including flat.

A small and compact USB dongle connects the Logitech MK540 keyboard and mouse via wireless 2.4GHz RF signals. This ‘unifying’ dongle sticks out by about 0.2 of an inch and works at up to almost 34 feet away.

Quiet yet snappy, roomy, and programmable, the Logitech MK540 keyboard and mouse combo will appeal to typists looking for a tactile typing experience without making too much clickety-clack.

The impressive and sensibly designed keyboard comes with every element where you’d expect plus a few extras, backed by slick Logitech Options software that makes it easy to customize.

The mouse may only be average in design, feel, and performance, but along with the keyboard, it’s well-built. Both should last you for years. Even more so, when you factor in the MK540’s keyboard’s USP; that it really does provide spill-resistant protection against hot and cold spills, and more!

Other than that, there’s no earth-shattering innovation or flair here, but this is a solid wireless keyboard and mouse combo that, with its hugely extended battery life, offers an overall good and fair deal.

The 3rd generation of Ryzen processors are here and they bring some serious performance improvements to the table. Furthermore, we also got the new...
Read more
Keyboard

If you are stuck between wanting something compact whilst maintaining the unmatched typing experience of a mechanical keyboard, a 60% mechanical keyboard might just...
Read more
0 0 votes
Article Rating
Subscribe
Login
0 Comments
Inline Feedbacks
View all comments