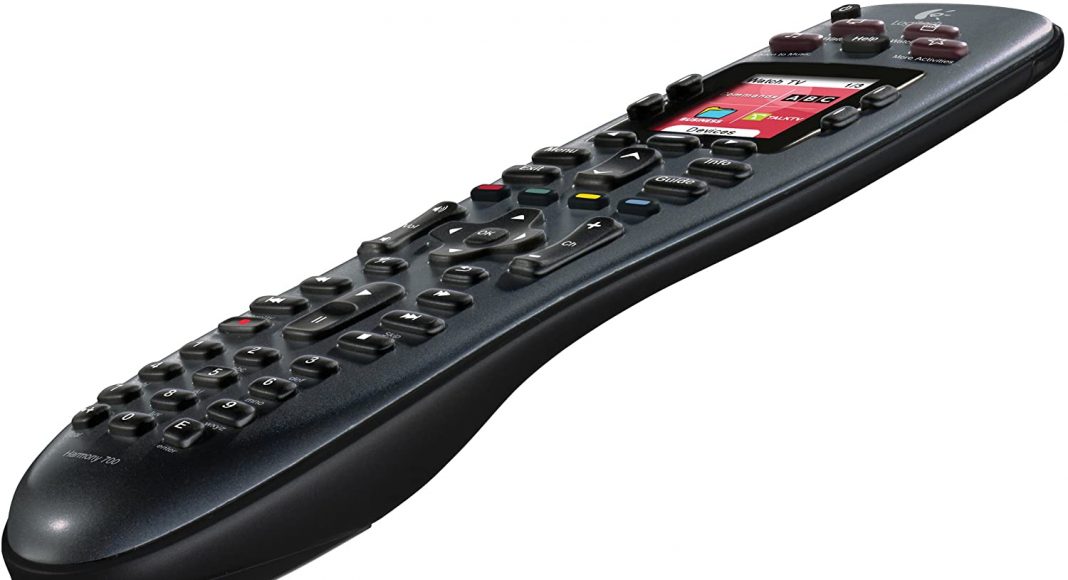 While not quite ‘cornering’ the universal remote control market, Logitech has at least dominated it for the last 10 years with the Harmony. So much so, that if you’re after a universal controller, then perhaps the most pertinent question to ask yourself, and others in seeking a recommendation, could be: “Which model in the extensive Harmony range is the one to get?” And since its release, a little over 10 years ago in April 2020, Harmony 700 has had a strong case as the answer.

It’s not difficult to see why. Along with all of Logitech’s line of Harmony remotes, it’s so easy to configure, sharing the same key strength of its set-up software. You connect the remote to your computer, and that’s PC or Mac, via the included USB cable and follow the simple step-by-step setup to download, install, and launch the application.

This ‘included’ downloadable Harmony software connects to an online database with information for more than 5,000 manufacturers and 225,000 devices. To program the remote, type in the model names of your kit; say your HDTV, DVD player, game console, and/or audio receiver.

The Harmony software will send the correct information to the 700 via the USB. Once you’ve entered all of your devices, Harmony 700 guides you through setting up one-touch control. Just tell the web-based system what kit you’ve got, and it will program your controller’s macros with utilities for those devices. These are then mapped to and can be controlled by, a single button to press on the remote. All of your settings are even saved in the cloud.

You can then execute certain actions depending on your selected activity. For example, hitting the ‘Watch TV’ button will turn on all of the necessary devices (television, cable or satellite receiver, Apple TV, etc) and change all of the required correct inputs, to enable you to do as you requested.

In fact, Harmony 700 can mimic any infrared remote (IR), even if it’s not in Logitech’s vast database. It has a very clever learning mode, which identifies and copies the remote’s IR signal.

Harmony 700 offers a similar design and feel, and certainly the same core functionality as Logitech’s previous model, Harmony One. On its release and review in 2009, the One became the ‘Editor’s Choice’ of so many publications and sites. but for $100 less.

So what then was the point of the 700 you might ask? Why did Logitech need to bother to design, engineer, build, and market another remote that, at the end of the day, does the same thing? We’ve used and tested Harmony 700, and we’ll tell you why below in this review…

Sure, the engine that drives the entire Harmony range does the same in Harmony 700, and it looks very similar to existing models. But this time around, the LCD screen is smaller at 1.9 x 1.9 inches. Also, it’s not a touch screen but instead has seven button controls. Because of that Logitech can offer it at $100 cheaper than the top-of-the-range Harmony One.

Logitech saw a gap in that range for those who want the full Harmony practical functionality, but aren’t bothered by the top-spec tech, and are more price-driven. Although you could argue that by charging via a micro-USB cable rather than the One’s dedicated charging cradle, that it delivers the latest tech while at the same time being able to reduce the cost.

That doesn’t mean that the 700 is exactly cheap. Compared to the many universal remote controls available online and in stores such as Radio Shack, it’s still considerably more, especially since it lacks RF functionality.

Logitech banked on the user wanting the confidence that comes with both the brand name and that of the rightly well-regarded Harmony moniker. Plus, more of course, in that it’s solidly backed up by that software.

Logitech believes that the Harmony user values, more than RF functionality, its database that knows the IR codes for around 225,000 devices, with the possibility to add more if you’ve got to hand the original remote for a model it doesn’t know.

Very comfortable to hold, like Harmony One, the 700 offers a similar ergonomically designed and engineered body. We preferred its charcoal-gray matte finish, to the One’s fingerprint-attracting glossy black.

It’s also powered by rechargeable batteries, although this time AA-size ones. This makes it a little heavier than the One with its lithium-ion battery, but they are easier to replace. The batteries are charged using a micro-USB cable, and both are included.

A sensor inside enables backlighting on the keys each time you pick up the remote, for easy visibility in dim light.

As we’ve written, all Harmony remotes share the same key strength; the set-up software. They’re so easy to get started. Set up a Logitech account for your remote on the web-based system, and tell it the details of all of your home A/V gear. It will recommend activities that will utilize them, programming them to the press of just one of the sturdy buttons on the controller unit. You’re welcome to putter and add extra operations and adjust these macros, but the default settings will get almost any system up and running with ease.

We tested how up-to-date the Harmony database is, and without a doubt, it knows some obscure hardware. It has the ability to imitate any IR, even those not found in Logitech’s vast database by utilizing its learning mode, which identifies and replicates the remote’s IR signal. On previous Harmony remotes, this was a tedious process, but with Harmony 700 you just turn it upside down to reveal its IR sensor.

We were even able to configure it to learn the IR commands of our office’s air conditioner’s remote; evidence that Logitech Harmony 700 works well as a truly universal remote.

Harmony 700 is essentially a stripped-down version of Logitech’s Harmony One. It’s ergonomically identical in dimensions at 8.8 x 2.3 x 1.3 inches but is heavier at 11.2 ounces with the batteries. Some may find its charcoal-gray matte finish less luxurious than the One’s gloss black.

The 700 does without the One’s dedicated dock, too, using a micro-USB cable for recharging. How you like this might depend on if you’re the sort of person who misplaces and can’t find their remotes.

We found the rubber buttons on the 700 slightly squishy, having a lot of responsiveness before a button press registers so that you have to press a bit harder than on previous plastic-buttoned models. Whether you like this or not, find it useful or annoying, is down to your personal preference.

Similarly, your opinion on the screen. The One has a 2.2-inch touch screen LCD, while the 700’s doesn’t have touch support; it has context-sensitive buttons to the side, rather than touch sensitivity. The screen is slightly smaller than the One’s, which also has a higher resolution at 220 x 176 pixels in comparison to the 128 x 128 pixels on the 700.

Harmony 700 only displays two activities at a time, and you flick to other activities from the front panel. It took us, in our office, quite a bit of time to get used to which buttons flick between activity choices and which ones launch them.

And while the software is the same, Harmony 700 doesn’t utilize it as fully, as it’s only capable of controlling a total of eight devices, compared to 15 for older models such as the One or 785. Of course, six may be enough or even more than you need, but the limit is something to consider. And we’re not even sure why it’s a limit in the first place, as offering more surely wouldn’t affect Logitech’s cost price, and so by extension that of the user.

Also, you can’t put multiple remotes onto one account for some reason, which could be a bit annoying if let’s say if you have one downstairs and one upstairs. You’ll need a separate account for each.

Logitech Harmony 700 doesn’t have the RF radio that you find in many, even cheaper remotes. As such, it’s unable to control devices that are hidden inside of cabinets or behind walls. Instead, everything needs to be in the remote’s line-of-sight to be able to control it. The 700 only comes with a six-month limited warranty. Lastly, like many universal remotes, there are a few more buttons on it that you might actually want or that you’ll ever conceivably use.

Batteries quickly lose the ability to hold a charge

You May Also Like: Logitech MK540 Review – A Deep Dive

Logitech Harmony 700 is a universal remote that gives you easy control over your home theater components, and more. In fact, over any of your AV devices, up to a maximum of eight.

Compatible with Windows 7, 8, or 10, and Mac OS X 10.7 or later, it’s easy to set up via Harmony’s web-based software. This has a database of the IR codes for around 225,000 devices. There’s even the possibility to add more if you’ve got the original remote for a model, with its onboard IR sensor. Once done, you can customize up to 23 favorite channels.

Harmony 700 has a sensor inside that enables backlighting on the keys each time you pick up the remote, for easy visibility in dim light.  Above its LCD screen are dedicated buttons for the kinds of activities Logitech presumes most users will want:  watching TV, movies, listening to music, and a programable button labeled ‘More Activities’. The side-mounted buttons launch activities, while the buttons at the base allow you to flip between activity choices.

Very comfortable to hold, like Harmony One, the 700 offers a similar ergonomically designed and engineered body. We preferred its charcoal-gray matte finish, to the One’s fingerprint-attracting glossy black.

Logitech Harmony 700 is very comfortable to hold, with an ergonomic design of 8.8 x 2.3 x 1.3 inches. It weighs 11.2 ounces with its two AA-size alkaline batteries. The batteries are charged using a micro-USB cable, and both are included.

Logitech Harmony 700 has plenty to offer. A comfortable ergonomic design with sturdy buttons, it has a snazzy internal sensor that switches on backlighting on the keys when you pick it up. Also an IR sensor for copying the codes of any of your device’s remotes that you have to hand.

In the world of cheap universal remote controls, Logitech Harmony 700 is by no means cheap, particularly it lacks RF functionality. But none of those $50 remotes offer the web-based software that makes setting up the Harmony remote a breeze and the intuition that makes it work so seamlessly.

It shares much of the same functionality of Logitech’s other well-regarded Harmony models but controls just eight devices while older models can handle many more.

For sure it’s a very good universal remote controller, but Logitech’s older universal remotes outclass it in features. At $100 less than the One, for example, you might have a different take, but we think that it offers plenty of good enough value to make it worth serious consideration.