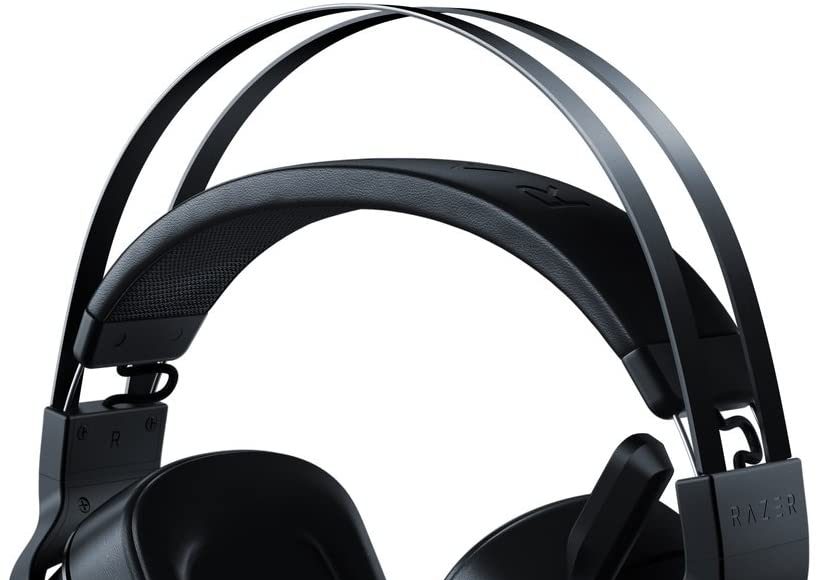 A Deep Dive Into The Razer Tiamat 7.1 V2

On its original release in May 2012, Razer placed 10 individual drivers, mimicking surround-sound speakers set up, in the ear cups for ‘pinpoint positional audio.’ In July 2017 it released an update to this immersive sound experience, in the form of the Tiamat 7.1 V2.

More than just a surround-sound system wrapped around your head, Razer set out to create the Ferrari of video game headsets. From the device’s packaging and presentation, they showcase an attention to detail and design aesthetic that is consistent with Razer’s brand identity and mission. Tiamat 7.1 V2 features the signature color scheme of all with subtle green accents and the company’s logo, which lights up when powered up.

Sound is absolutely clear that you hear everything due to the Razer’s virtual 7.1 surround-sound engine. By putting you literally in the middle of the action, you have total immersion with the game for aural situational awareness leading to total tactical advantage. You’ll know where the enemy is coming from and where your team is located, to be able to strike with precision.

The audio channels can be set for your listening preference due to its customizable engine via Razer Synapse. Thanks to years of pro-gamer feedback this product includes ergonomic engineering of the unique headband construction which offers both balanced weight distribution and reduced clamping force. Experience high-quality comfort and sound-isolation provided by the plush leatherette ear cushions.

The headset’s in-line Audio Control Unit was redesigned in the V2. It lets you adjust the volume quickly and fine-tune the audio for each channel. There’s also a button to switch the headset from surround-sound to stereo and a pass-through for switching to your external desktop speakers. In-game chat is taken care of by a rotating unidirectional boom mic that folds into the ear cup for when you’re not using it.

The headset and control unit even have lights powered by Razer Chroma for an unbelievable 16.8 million color choices and effects. Of course, you’ll never see the light show when they’re on your head, but your opponents can. They’ll know just how awesome and rad they are, and that you mean, as well as look, the business!

On its release in 2012, Razer billed the Tiamat 7.1 as the first ‘true’ 7.1 gaming headset, yet there was barely any 7.1 content to take advantage of the then-new technology.

But Razer defined, perhaps even, made a new market, asking questions that you didn’t even know there was a potential solution to. Sick of people sneaking up on you, and want to know where the enemy is firing from in your favorite shooter? Then these should do the trick!

At that time, and still, on the release of the updated V2, the price was prohibitive for many gamers, at nearly $200. Now that 7.1 tech is more established, that’s no longer the case, and you can buy a pair for less than half. Although to get the best surround-sound experience, you’ll need to shell out for a 7.1-surround capable sound card. A 5.1 surround-sound card will work, as will standard stereo inputs, but you’ll be missing out on the whole essence of the product – the extra drivers in the headphones – so why bother?

Is Razer Tiamat 7.1 V2 right for the PC gamer? With some of the best bass we’ve heard in a gaming headset, incredible audio quality, and 7.1-channel surround, they’re a great addition to your PC gaming setup. But it’s a value proposition really.

If you’re using an older motherboard, or just aren’t happy with your current audio setup, then a 7.1 sound card is going to be a great investment anyway. And once, or if, you have that sound card the Razer Tiamat 7.1 V2 will deliver on its claims. But it comes down to how seriously you take your gaming, and/or how much ‘true’ (albeit virtual) 3D immersive sound adds to your enjoyment and experience.

Razer constructed the adjustable headband for extra comfort. Below the hard plastic that supports the earcups, a suspension system connects a soft rubber and synthetic leather inner headband. The same synthetic leather, line the large and tight-fitting earcups, that remain snug but don’t get hot and sweaty after long gaming sessions. The sealed-off ear cups keep the ambient noise out and your gaming noises in.

The build of Razer Tiamat 7.1 V2 is solid and sturdy. The plastic is lightweight yet it is quality material and the outer cover of the ear cups is see-through so you, when not wearing them, can see the profile and position of the individual speakers. And if you don’t want others too when you are, there are ear cup covers that attach with magnetic connectors. At the base of the cups, the Green Razer logos light up when in use.

Despite its looks, what you’re paying for are those 10 those individual drivers built within, which make this a 7.1 headset. There are two sub-woofer drivers, two front drivers, two center drivers, two sides and two back surround drivers, one in each cup, to give you the maximum sound impact with your favorite games.

The two low-frequency drivers boomed explosions and gunfire. The flat bass notes resounded powerfully without distorting. The various sound frequencies of a wide array of actions and vehicles were crisp and rich in tone. The extra drivers distinguished individual low, mid and high frequency sounds with greater resonance, for the best 7.1-channel experience we’ve experienced with a headset.

We liked that the boom mic can be tucked away discreetly inside of the left earcup, sliding in and out with ease, for when you’re just listening and not talking during your gaming. It also has a flexible tip to position the mic exactly where you want when you are.

But the volume control unit was probably our favorite feature. There are no controls on Razer Tiamat 7.1 V2 itself. What you have is an in-line control box between the headset and the analog audio connections.

About as large as size A4 paper, it consists of a volume knob, a toggle switch to swap between the headset’s speakers, and three buttons – one for muting the microphone, a second for toggling between speakers and the headset, and the third for swapping between 7.1 and 2.0 output modes. You can adjust each volume level independently; the lighted dial around the volume knob indicates each level individually. The volume knob also serves as a large mute button.

There’s a lot of flexibility and freedom here. We found the sweet spot for every single setting. We especially liked that speaker and headset toggle switch. With a micro-USB port on one end of the unit, you can plug in the included speaker input dongle. Just plug your speakers into that, and you can automatically swap between headsets and speakers on the fly, depending on whether pinpoint audio accuracy is a distinct advantage in a game or not.

Another innovation, of the Razer line of headphones as a whole, is the use of braided cable connecting it to the PC. Strong and durable, while being generous in length, there’s less tangling than its cheaper plastic counterparts.

Installation is fiddly. You have to connect the five 3.5mm jacks, each of which corresponds to its respective driver: front (green), center and sub-woofer (orange), side surround (gray), rear surround (black), and the microphone (pink). The USB connector powers the volume control panel.

As an analog surround-sound headset, you need a sound card that supports at least 5.1, or more ideally 7.1-channel surround and has individual front, rear, surround, and subwoofer ports. If you don’t have a surround-sound card, you can use it with just the standard stereo input by disabling the surround-sound on the headphones, but then you’re overpaying for a feature you won’t use.

While the overall sound experience was excellent due to the number of drivers encased within, but this same characteristic hinders the full potential of the headset’s sound quality. The inclusion of so many speakers creates an extremely cramped space, resulting in smaller drivers than 5.1 headsets provide, and potentially inferior sound quality when compared to high-end stereo headsets with well-balanced drivers.

For sure, it’s responsive due to the smaller speakers, but we found Razer Tiamat 7.1 V2’s sound was crystal clear but not big enough. The highs were slightly tinny, and overall, the sound could have benefited from a bit more warmth.

There was an annoying buzz that emanated, according to Razer at least, due to my motherboard’s USB ports having a grounding issue. We needed to use an external USB adapter with the USB plug that powers the volume control unit, to get rid of the buzz. Further, while we loved that the unit lets you adjust each volume level individually, we’d have done so even more if there was the ability to save profiles.

Also accommodating the extra drivers makes the size of the headphones quite bulky. And while they work for general use, the non-detachable mic makes them rather conspicuous when out and about.

As well as the headset unit itself, Razer Tiamat 7.1 V2 comes with the audio control unit, a 3.5mm audio splitter extension, and a quick start guide.

Each ear cup is equipped with a 40 mm subwoofer, 30 mm front (L/R) and center drivers, and 20 mm rear and side surround drivers, that operate together to create highly accurate directional audio. The headphone’s frequency response is 20-20,000 Hz.

The outer cover of the ear cups is semi-transparent, allowing you to see the workings inside. If you’d prefer not to, it comes with ear cup covers that attach with magnetic connectors. Razer Chroma lighting gives you 16.8 million customizable color options

A rotatable digital boom mic, designed for natural sound reproduction and unidirectional pickup, can be pulled down or flipped away as needed. The microphone: frequency response is 100–10,000 Hz.

It has a separate Audio Control Unit for total sound customization: control the volume of each audio channel, even toggle between 7.1 surround-sound and stereo audio, and pass-through for easy toggle between headphones and speakers.

Weighing 14.6 ounces, premium comfort and durability for extended play are provided by its unique headband construction. This ensures balanced weight distribution and a soft rubber and synthetic leather inner headband, reduced clamping force. Faux leather also lines the comfortable and snug-fitting earcups, keeping the ambient noise out and your gaming noises in

Razer Tiamat 7.1 V2 is well designed, engineered, and built a bit out of a kit. It’s worthy of its title as the first of its kind; first ‘true’ 7.1 gaming headset.

But you’ll need a 7.1 soundcard to unlock its potential. Yet to us, it still can’t compare to a surround-sound speaker setup. Of course, that’s not quite its point or purpose. And what it does do, it does excellently; it outputs clear, pristine audio, and has a multiple-feature volume control, external speaker connectivity, and a useful mute function.